After all, the hours have come when you could put your efforts under scrutiny, the hard work put in for successfully passing the NEET (National Eligibility cum Entrance Test) 2018. On October 25, 2017, an executive committee meeting of the MCI (Medical Council of India) has decided on this matter. As per the report details, the examination will be held by May 10 of the next year. Thus, do not think that the probable date will be May 10th as the Council has instructed the Central Board of Secondary Education (CBSE) in clear words that NEET 2018 should be conducted by May 10th and not afterwards. The NEET 2018 UG candidates must wait for the official notice released by the CBSE that is expected to be published by January 2018.

Brief Details of the MCI Executive Committee Meeting
The prestige of the MCI executive committee meeting was enhanced by the presence of the President Dr. Jayshree Mehta and the VP Dr. C.V. Bhirmanandham. In the meeting, it was decided that the results should be published before the beginning of the second week of the month of June, 2018. In addition, MCI has decided to conduct the first round of the counselling session for seats under All India Quota, Deemed and Central Universities from 12th June onwards.

The Routine for the Exam Dates Approved by the MCI
MCI has sent the routine for NEET dates to CBSE for consideration. The MBBS aspirants should go through the report published on the Page 71…” the Executive Committee of the Council approved the following schedule for completion of admission for MBBS course and directed to include in the Graduate Medical Education Regulations, 1997”: 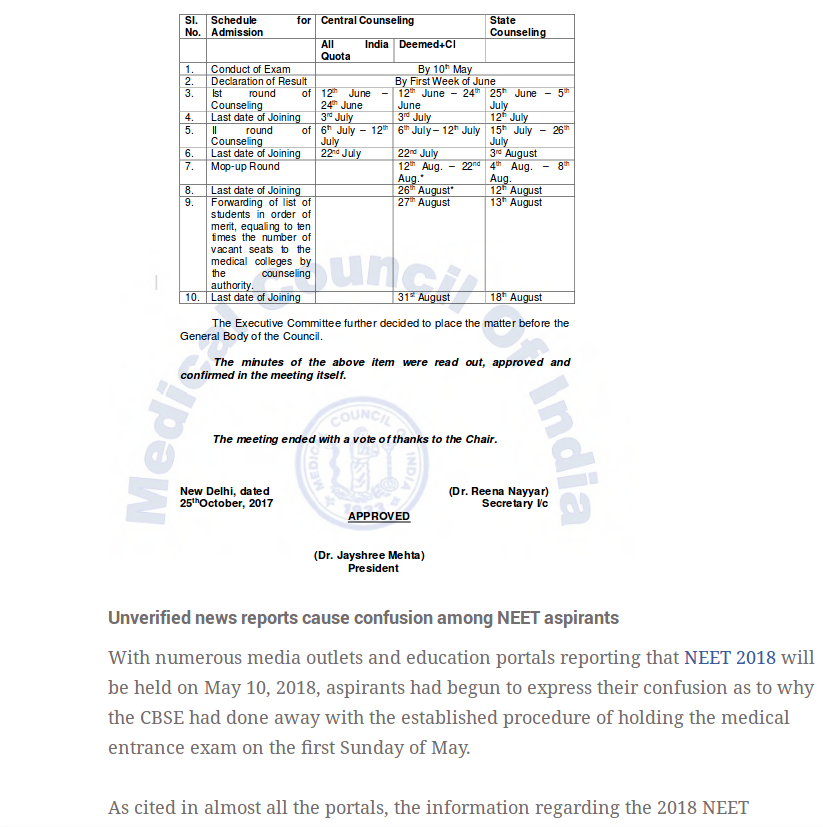 The media reports have heightened the confusion level and anxiety among the candidates. Most of the media houses had reported that the date of NEET 2018 has been fixed by MCI and it will be held on 10th May, 2018. This is a diversion to the general norm followed by CBSE which usually conducts the entrance exam on the very first Sunday of May.

However, as it is instructed by MCI that NEET 2018 should be conducted before 10th May, 2018, hence the expected date is 6th May, 2018 which is the first Sunday of May. The students are advised to keep a tab on the actual declaration by CBSE. They could also get in touch with the education consultants in India and keep themselves updated apart from exploring the benefits of other services.