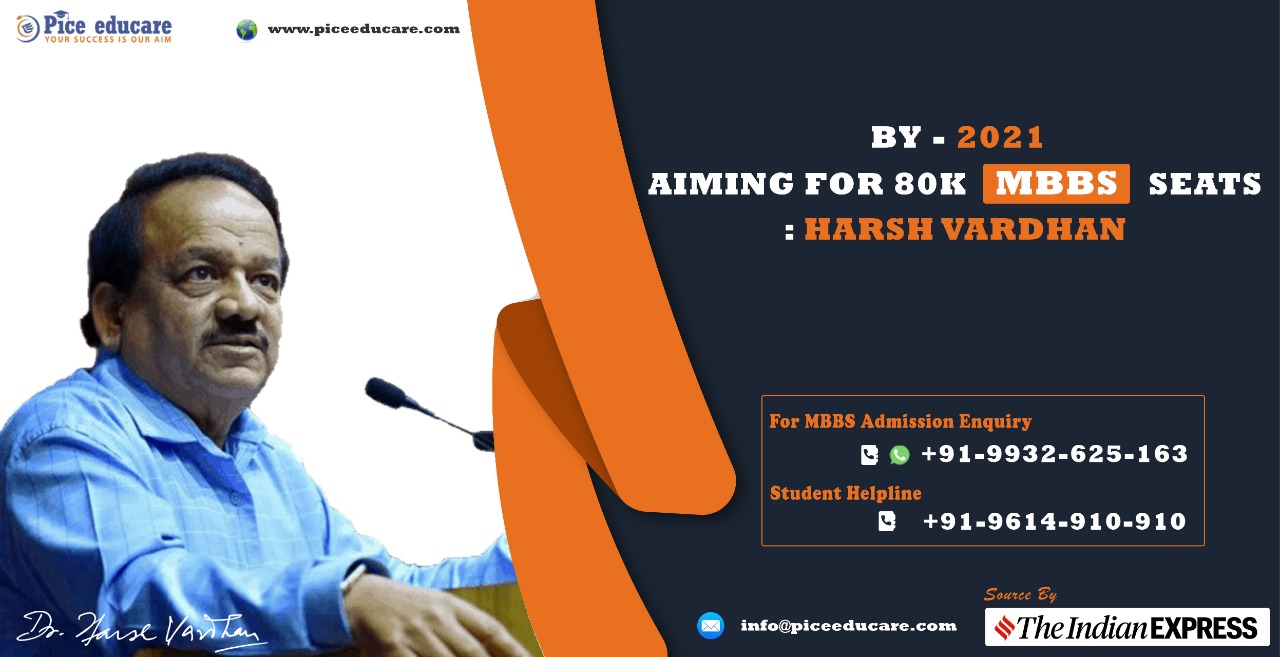 “The health ministry is striving to achieve the WHO target of the doctor-patient ratio of one (physician) for every 1,000 by 2021,” Union Health and Family Welfare Minister Harsh Vardhan said.

Union Health and Family Welfare Minister Harsh Vardhan said Monday the number of MBBS seats in government-run institutes across the country has gone up to 42,495 with the recent additions and the plan was to further increase it to 80,000 to meet the ratio of one doctor per 1,000 people as recommended by the World Health Organisation (WHO). 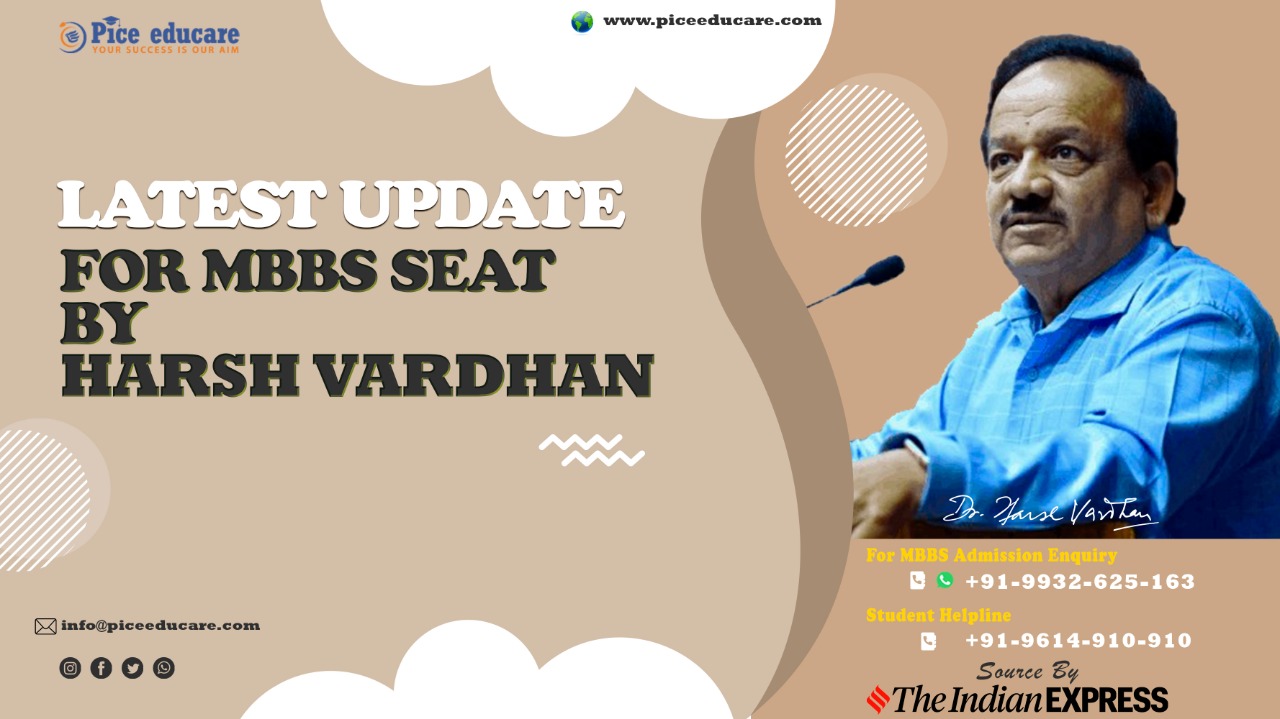 “The health ministry is striving to achieve the WHO target of the doctor-patient ratio of one (physician) for every 1,000 by 2021. Our government has been making an honest endeavour to increase the overall availability of MBBS seats to 80,000 with the urgent aim to bridge the gap in requirement of doctors,” Vardhan said. He was addressing a ceremony to mark the beginning of the first academic session All India Institute of Medical Sciences (AIIMS), Rajkot, to run from a temporary campus for now, through video-conferencing from Delhi.

This will be the first AIIMS in Gujarat, groundbreaking for which would be performed by Prime Minister Narendra Modi, Chief Minister Vijay Rupani said at the event.

“From the academic session 2013-14 onwards, the total number of MBBS seats in the six new AIIMS has gone up to 600, providing an opportunity to an additional 300 aspirants. With the addition of new AIIMS, including AIIMS Rajkot, the overall availability of MBBS seats in the country has gone up to 42,495 in government institutions. These MBBS seats will see a further increase in future as AIIMS Rajkot shifts from its temporary campus to the permanent campus and as infrastructure and human resource augmentation takes place,” the minister said.

With 50 MBBS students, the inaugural batch of AIIMS Rajkot will function out of a temporary campus set up in a section of the Pandit Deendayal Upadhyay Government Medical College and PDU Hospital in Rajkot. The state government has allotted 200 acres for the institute in Para-Pipaliya village on Jamnagar Road on the outskirts of the city which will be developed by the central government with a total outlay of Rs 1,195 crore, including Rs 185 crore for state-of-the-art medical equipment, Vardhan said. The institute, he added, will have 125 MBBS seats, 60 nursing seats, a 750-bed hospital and a number of multi-speciality and super-speciality departments.

“AIIMS Rajkot is part of the new prestigious institutions that were conceived under the visionary leadership of our honourable Prime Minister Narendra Modi. While the short-term objective of establishing new AIIMS in various parts of India is to reduce the gap in affordable tertiary healthcare, the long-term vision is to generate wellness among the general population,” the health minister said.

Union Minister of State for Health and Family Welfare Minister Ashwini Kumar Choubey said AIIMS Rajkot will prove to be a foundation stone of the next phase of healthcare development in Gujarat.

Addressing the event from Gandhinagar through video-conferencing, Chief Minister Vijay Rupani thanked the Prime Minister for giving Gujarat the premier institute. “We want the PM to lay the foundation stone (of the AIIMS campus). I had dialled Ashwini Kumar Choubey four to five days ago and suggested that if files are moved quickly and the agency is fixed, we shall be able to seek time of the PM and can have the foundation stone laying ceremony early.”

With AIIMS Rajkot, Rupani said super-speciality services will now be available to all people, especially from Saurashtra and Kutch. “The AIIMS will be a huge boost to the medical and healthcare sector in Gujarat. It will usher in a new wind in the healthcare sector of the state,” he said.

Accusing the previous governments of neglecting the healthcare sector, Rupani said there were only 900 MBBS seats in Gujarat before Modi took over as the chief minister in 2001. “I am happy to note that from 900 medical seats before Modi became Gujarat CM, we have managed to increase it to 6,000 seats within two decades. There were only 10 universities back then, but now there are 70. Thanks to these initiatives, the issues like shortage of doctors and Gujarat students having to go out for medical education have been addressed… In coming days, I am confident, Gujarat will emerge as a prominent state in medical tourism,” Rupani said.

Gujarat Deputy Chief Minister Nitin Patel, who is also state health minister, said earlier students had to go to other states, even abroad, for medical education and would spend up to Rs 30 lakh in the process. “But the number of seats in the state has now gone up to 6,000… This has become possible due to Modi… Over the past few years, we are setting up a couple of new medical colleges every year. Last week, Vardhan approved a proposal to set up a medical college in Morbi district under the central government’s initiative to set up medical colleges in 75 districts of the country which have no such colleges so far,” he said.

MPs Mohan Kundariya, Amee Yajnik and Poonam Maadam also attended the event in Rajkot. Of the 50 students in the first batch of AIIMS Rajkot, 22 are from the state.